Parents want the best for their children, and getting them into a good college—and thriving there academically—is a common goal. College acceptance is widely considered to be a gateway to success in the adult world.

It is thoroughly distressing, then, that so many high school graduates lack the skills to succeed at the university level. The National Assessment of Educational Progress (NAEP) reports that, based on recent test results, fewer than 40 percent of American high school seniors are ready for college-level reading and math tasks.1 College professors are quick to corroborate, lamenting that incoming freshmen lack the ability to think independently:

“They're not ready. They don't [know] anything about the way to study. ... I said, ‘We'll have that quiz on Wednesday.’ There was a panic.

“‘Wednesday? I won't know it by Wednesday.’ They learn to memorize, to let it go. OK. So we've lost the part where you learn. I should ask you 50 years from now and there are some things you should know.”2

The solution to the problems facing so many under-prepared college freshmen begins not in high school but in preschool. It is here that the youngest students get their first taste of learning to learn. Unfortunately, many schools are instead teaching to the test at ever-younger ages and missing crucial windows of opportunity for teaching children to recognize patterns, understand concepts, and apply logic—skills that allow them to take charge of their own learning as they grow. To help students build that framework, the best teachers teach conceptually.

The Problem with Rote Memorization

When students are taught merely to memorize facts and information, they are likely to forget the information the minute they feel it's no longer important; i.e., after the test is over. When the entire foundation of public education today relies so heavily upon testing to measure the progress of students, teachers, and schools, it should come as no surprise that the pressure to do well on those tests leads to an outsized emphasis on memorizing the material needed to pass. Precious little time is left over for putting those facts and discrete bits of information into any useful context.

While a test-taking culture often boils down to teaching to the test, tips and “tricks” for approaching standardized test questions, and regurgitation of momentarily memorized material, learning requires students to think logically and draw connections between what they are learning and what they already know.

What It Means to Teach Conceptually

When a teacher designs lessons that focus on concepts instead of individual facts, she is teaching conceptually. Concepts can be understood as categories that can contain smaller facts or ideas but are simultaneously part of larger categories. It's not enough just to know the concept itself: Teaching conceptually requires teachers to address—and students to master—the relationships between concepts and the ways in which they can be arranged into a functional hierarchy. Students use this framework to logically sort information and draw crucial connections across subjects for a cohesive understanding of the world. Quite simply, it's the system the active human mind uses to gain understanding.

Teaching conceptually is best understood by considering a classic example that all Challenger School teachers have discussed in their professional development and training. To teach a child about an apple, we approach the subject as a concept.

What is an apple?

An apple is a fruit. Right away, this takes the concept of an apple and places it into a hierarchy of ideas: Fruit is the overarching concept into which an apple can be placed. Bananas, oranges, and grapes can also be added to the concept of fruit, and students learn to see what characteristics these have in common that cause them to be grouped together. In the case of fruit, the defining concept that connects them is that they are all plant parts that contain seeds by which the plant reproduces.

Just as the concept of an apple is part of a larger picture, it also can be broken down into subordinate concepts. In the category of apple, there are different varieties. An overarching concept of all varieties of apples is that the fruit comes from a certain species of tree.

When thinking about an apple conceptually, it's not enough just to explore a list of facts about apples with students (for example, that they are sweet, round, and sometimes red). To really understand what makes an apple an apple, concepts help students tie facts together to understand which characteristics are crucial to its identification.

Concepts give shape and meaning to individual facts, allowing students a far deeper understanding of their significance. For example, teaching conceptually allows students to move well beyond the mere memorization of dates in history and encourages them to group events as concepts (for example, "root causes of the Civil War" or "results of the Industrial Revolution"). Once students understand concepts, they can see relationships between different concepts in the history of the world for a richer understanding of the human experience; for example, they can draw connections between seemingly disparate events like Thoreau's "Civil Disobedience," Gandhi's hunger strikes, and the Greensboro lunch counter sit-ins.

With strong conceptual teaching skills, talented teachers create lessons in which everything taught is meaningful. There are no useless facts; rather, everything is connected. When students begin internalizing these frameworks as preschoolers, they learn to be highly logical thinkers who break down ideas into their parts and find connections between different parts of the curriculum. Making these connections is the highest order of thinking. When young children are encouraged to find and create patterns and organize concepts into a hierarchy, they are well on their way to the independent study and thinking habits needed for success in competitive high schools and colleges. 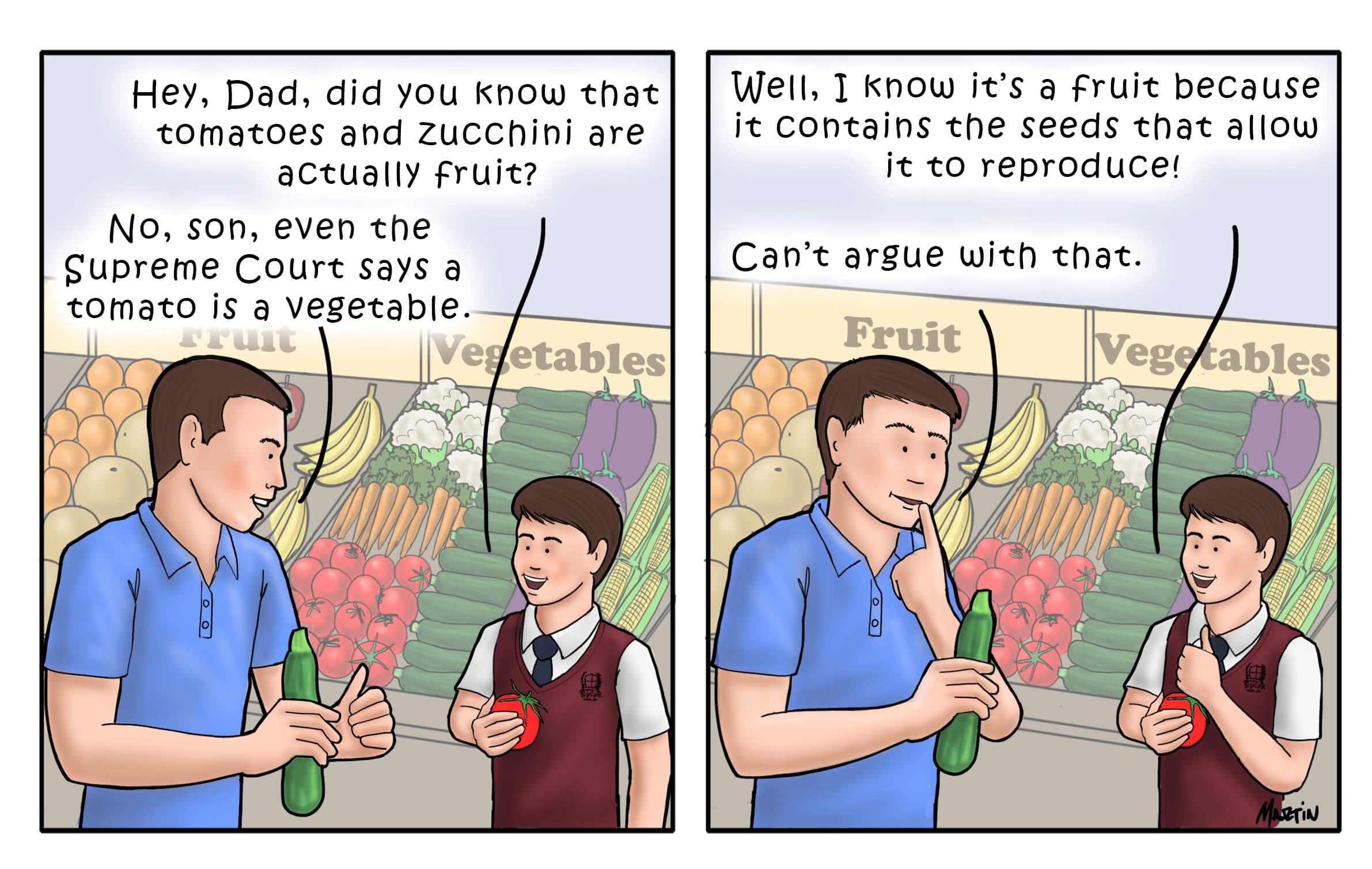 The U.S. Supreme Court declared tomatoes to be vegetables in Nix vs. Hedden, 1893.

Teaching children to think conceptually also empowers them to make good decisions because they internalize the right thing to do instead of memorizing a list of abstract rules. For example, on my daughter’s first birthday, she quickly became mesmerized by a large candle burning atop the cake. She attempted to grab it several times and was repeatedly told “No, HOT!” But she eventually succeeded, grabbed the candle, and the hot, melted wax poured down her wrist. I saw her facial expression before she began to cry, and I told her “No, HOT!” to attach the concept to the sensation. In the future, she stayed away from items that were described as hot in order to not repeat this unpleasant experience. She avoided this behavior not because I said so but because she understood the concept of hot. This ability to conceptualize is what allows my young daughter, and all rational beings, to understand ideas that they cannot perceive directly.

Such hands-on conceptual learning allows students to quickly discern right from wrong in their moral development as well. Rather than following a list of typical classroom rules about behavior, conceptual learning encourages students to understand the concepts of good behavior instead. What does it mean to act morally? To be a contributing member of the class? These overarching concepts of what it means to do the right thing are far more powerful than authoritative rules that tempt students to rebel without thinking. Thoughtful, rational students value each other and understand that they are free to choose their behaviors but that these behaviors have logical consequences.

In an era when many public schools are racing to pump facts into their students in time for the next round of standardized tests, Challenger teachers stand firm in doing what they've always known works best for children's intellectual development: empowering students to think for themselves by teaching them concepts instead of curriculum bullet points. Challenger’s aim in educating students is to develop independent young people capable of critical thinking and problem solving.

The Center for College Readiness at Rice University defines the number one attribute for college readiness as "the ability to think critically and problem solve in the context of a continuously changing set of circumstances and realities.”3 With conceptual teaching at the forefront of a Challenger education, students are fully prepared to rise to the occasion and excel, thanks to the higher-order thinking skills they are taught from their very first preschool lessons. It's not a process that can be easily replicated with a few quick promises; rather, it is the total commitment of every staff member in the Challenger system that brings conceptual teaching to life for each student.